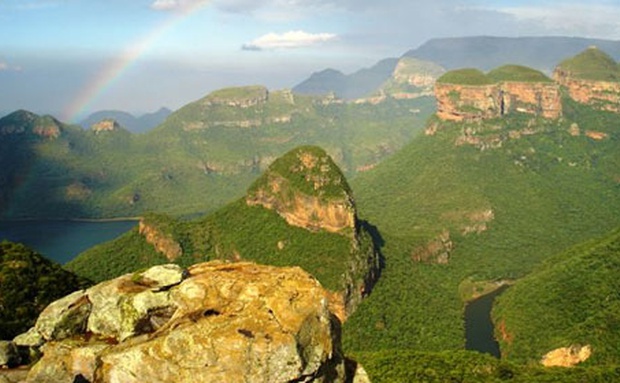 ­Blyde River Canyon ranks as one of the most spectacular sights in Africa. This great Escarpment is the kind of place where brochures and guide books run out of original adjectives to describe the fresh mountain scenery and magnificent panoramic views. As umVangati House is in the heart of the Blyde Canyon, we should tell you more.

The Blyde River Canyon is the third largest canyon in the world, after the Grand Canyon in the United States and the Fish River Canyon in Namibia, and is the largest 'green canyon' due to its lush subtropical foliage, with the deepest precipitious cliffs of any canyon on the planet.

The entire canyon extends over twenty kilometres in length.

The Blyde River  is dammed at the mouth of the Canyon to create the Blyde Dam at Swadini.
There is an information centre at the end of the road with excellent views over the dam; prior to this there are viewpoints and a short hike to the dam wall can also be done.

There are then some spectacular sights in quick succession as you follow the road along the rim of the Canyon – the Panorama Route.

First off is the Three Rondavels viewpoint.Huge rock spirals rising spectacularly out of the far wall of the canyon. A glorious spot for photography, this outlook bears repeated visits to watch the changing light and weather transforming the view. The Three Rondawels are three peaks isolated through geological weathering from the surrounding land. As a result they are natural islands, where there is interesting biological speciation taking place. A number of species have not yet been formally named.

The Three Rondavels are named after three of the many wives of chief Maripi Mashile. On the left is Magabolle, 1354m above sea level; Mogoladikwe, 1377m above sea level and Maseroto, 1465m above sea level.Continue along the R532 past the Aventura Blyde River Canyon Resort where there are a number of spectacular 2 to 3 hour hiking trails.

Where the Blyde and the Treur Rivers meet, water erosion has formed one of the most remarkable geological phenomena in the country, known as ‘Bourke’s Luck Potholes’. Over thousands of years, surreal cylindrical rock sculptures created by whirling water, have formed a series of dark pools which contrast spectacularly with the streaked white and yellow lichen-covered rocks.It was named after a local prospector, Tom Bourke, who predicted the presence of gold, though he found none himself. The pedestrian bridges connect the various overlooks of the potholes and the gorge downstream. 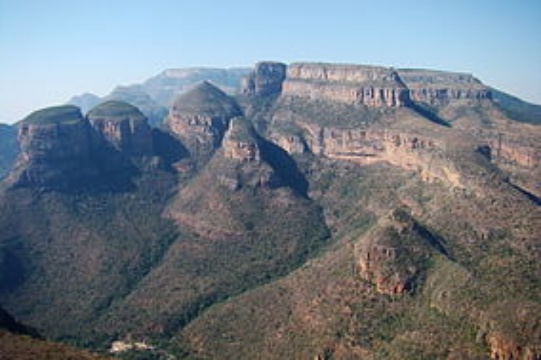 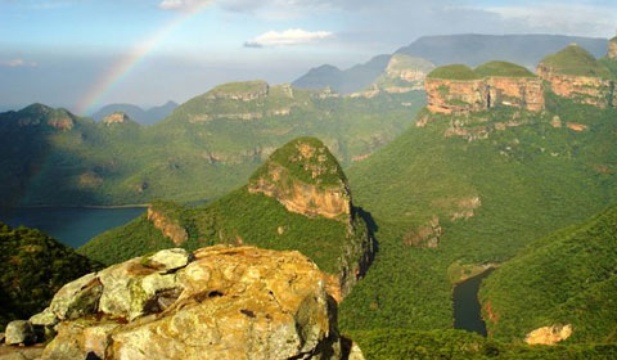 The 'Pinnacle' is a single quartzite column rising out of the deep wooded canyon and the ‘Three Rondavels' , three huge spirals of dolomite rock rising out of the far wall of the Blyde River canyon, stained with fiery orange lichen, are spectacular.

Blyde River Canyon Nature Reserve is one of the few areas of montane grassland in Mpumalanga that still exists. The grasslands consist of more than 1 000 flora species of which many are endemic (found nowhere else in the world), rare or endangered.

The rich and varied plant life supports an equally rich and varied fauna. Klipspringer and dassies find food and shelter in rocky areas. The grassland supports grey rhebuck and the rare oribi as well as rodents, reptiles, seed-eating birds and plenty of insects. Kudu prefer the cover of wooded bushveld and bushbuck and bushpig move amongst the luxuriant growth on the riverbanks. All five of South Africa's primates - samango monkey, nocturnal greater and lesser bushbabies, baboons and vervet monkeys - can be see in the The Blyde River Canyon Nature Reserve, as can hippo and crocodile, and the birdlife is significant.

Birds associated with flowering plants of the higher slopes include Gurney's sugarbird and malachite sunbird. A breeding colony of bald ibis occurs in the grassy uplands, besides small numbers of cape eagle-owl and red-breasted sparrowhawk. Forest birds include crowned eagle, knysna lourie, cinnamon dove, olive bushshrike, green twinspot and wood owl. Another extraordinary inhabitant is the Taita Falcon which is only found in a few places in the world.

According to the myth, 2 million pounds in buried gold and diamonds are hidden in the vicinity of the Blyde River.

In 1905, when Paul Kruger was president of the South African Republic, a man named John Holtzhauzen was sentenced to 30 months in prison for stealing a horse and carriage. When in prison he let it be known that he and two others had been charged by the government of the South African Republic to bury gold and diamonds to the value of 2 million pounds in order to keep it from falling into the hands of the British.

Whether this was true was never established, and the mystery of the missing Kruger Millions has never ceased to fire the imaginations of treasure hunters and intrepid searchers, who still seek out the missing loot to this very day